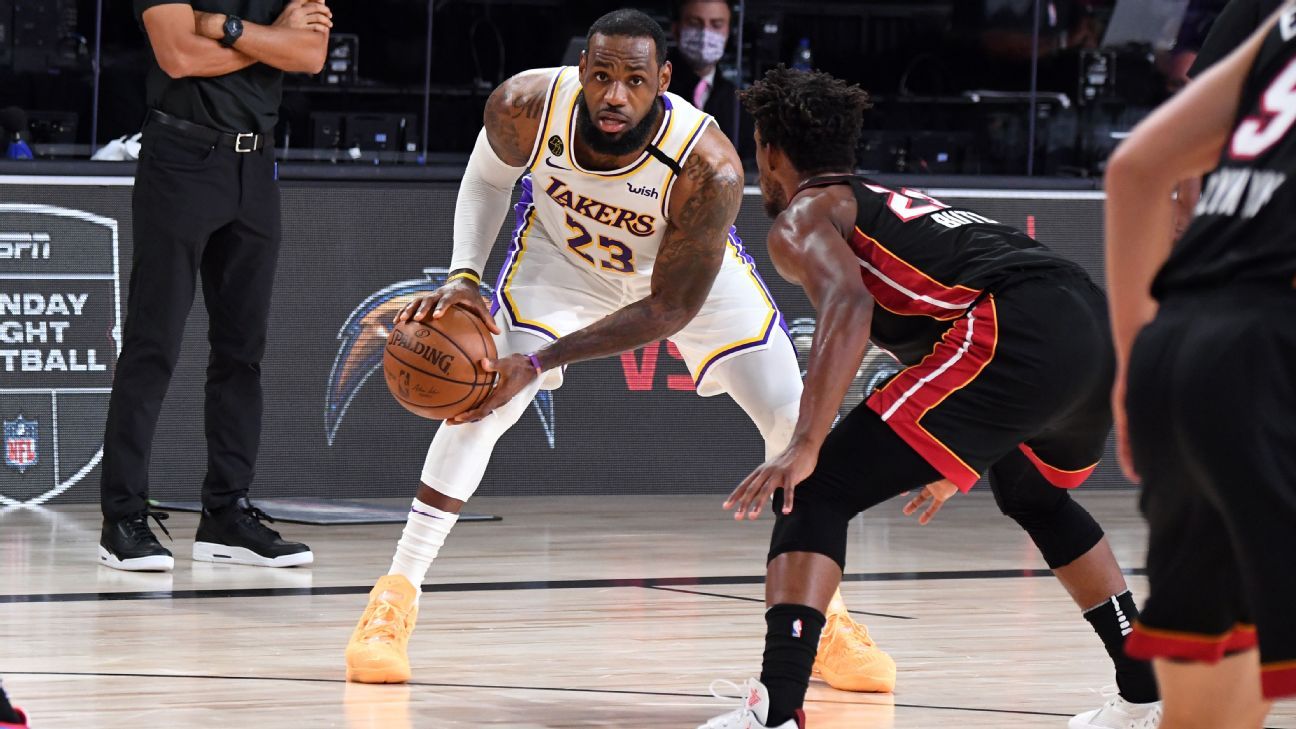 LAKE BUENA VISTA, Fla. — Capping the longest season in NBA history with a dominant final flourish, the Los Angeles Lakers won it all for the first time in a decade.

In a 103-93 close-out Game 6 of the NBA Finals against the Miami Heat, LeBron James logged a triple-double – 28 points, 13 rebounds and 10 assists — to win his fourth ring and third championship with three different franchises, while Anthony Davis added 19 points and 15 boards.

It was the third wire-to-wire victory to clinch an NBA title in the last 50 seasons, according to the Elias Sports Bureau, joining the 1982 Lakers and the 1986 Boston Celtics.

After failing to finish out the Heat in Friday’s Game 5 – James’ first loss in a closeout opportunity in his Finals career – Lakers coach Frank Vogel changed the starting lineup, moving Davis to the 5 and plugging in Alex Caruso in Dwight Howard’s place, for a smaller, shiftier group.

The move seemed to give L.A. a boost as the Lakers led 28-20 after the first quarter and by as many as 30 in the first half, as they outscored Miami 36-16 in the second.

L.A.’s 28-point halftime lead was the second largest in NBA history – just below the 30-point lead the Celtics had on the Lakers in Game 1 of the 1985 Finals. In other words, Memorial Day Massacre, meet the Bubble Bloodbath.

This is the Lakers’ 17th NBA championship, tying the franchise for the most in league history with the Boston Celtics, who most recently won a title in 2008 by defeating a Kobe Bryant-led Los Angeles team. The Lakers last raised the Larry O’Brien Trophy in 2010 — beating Boston, with Bryant winning Finals MVP.

The championship was historic in many respects. The Lakers became the first team in league history to go undefeated when taking a lead into the fourth quarter, going 57-0 between the regular season and playoffs. They also were the first franchise to earn the No. 1 seed immediately following a five-year postseason absence.

But L.A. also endured the unprecedented scenario of a season restart in an NBA bubble at Walt Disney World to conclude a season stopped by the COVID-19 pandemic. Los Angeles spent 95 days in the bubble, going 3-5 in the tune-up seeding games before defeating the Portland Trail Blazers, Houston Rockets and Denver Nuggets in five games and the Heat in six.

The first-round matchup with the Trail Blazers highlighted the complexities of navigating a title run as social unrest over police brutality pulsed through the country. Many players joined peaceful protests after the killing of George Floyd on May 25, then took more drastic measures following the Aug. 23 shooting of Jacob Blake, a 29-year-old Black man, by police in Kenosha, Wisconsin.

The Milwaukee Bucks initiated an impromptu boycott resulting in the postponement of the postseason’s first round for three days as the players sought to reconcile how to enact more social change. James was part of a small group of players to consult with President Barack Obama on ideas about how to move forward and make the work stoppage meaningful. The NBA made the decision to display “Black Lives Matter” at halfcourt when the courts were constructed in July.

Turmoil was a trending topic for the Lakers all season. It started with a preseason trip to China rife with tension after Rockets general manager Daryl Morey’s tweet in support of Hong Kong protesters threatened to cancel the exhibition games that L.A. flew halfway around the world to play.

In January the team was in New York for former NBA commissioner David Stern’s memorial service at Radio City Music Hall. And later that month, the franchise mourned along with the global basketball community after Bryant and his daughter, Gianna, were among nine peopled killed in a helicopter crash.

The Lakers carried Bryant’s memory with them the rest of the season, ending huddles with “1-2-3, Mamba!” and breaking out special Black Mamba uniforms in the playoffs. They wore the jerseys five times in the postseason and went 4-1, including Game 2 of the Western Conference finals when Davis hit the game winning shot at the buzzer and exclaimed “Kobe!” after the ball fell through the net.

“We’ve always felt like Kobe was with us; never more than that moment,” Lakers coach Frank Vogel said when asked to look back at his team’s postseason run.

In purely a basketball sense, it was a renaissance season for L.A., finishing third in defensive rating, 11th in offensive rating and only amassing three losing streaks all year, but the second season for James and the Lakers could not be more different than the first — which was a disaster. The Lakers plummeted in the standings after James suffered a slight tear in his left groin on Christmas Day. And when he returned for a failed playoff push — shortly before L.A. was unable to acquire Davis from the New Orleans Pelicans — the wheels fell off the franchise. Then-president of basketball operations Magic Johnson stunned the team by announcing his resignation before the regular-season finale. Not long after, the team parted ways with then-coach Luke Walton.

Slowly, the organization stabilized. On May 13, they hired Vogel as their coach after Monty Williams backed out of negotiations and an agreement with Tyronn Lue fell apart over money. General manager Rob Pelinka, empowered to run the front office with Johnson gone and no one hired to replace him, finally executed a trade that landed Davis for Lonzo Ball, Brandon Ingram, Josh Hart, three first-round picks and a pick swap.

The Lakers made a free agency run at Kawhi Leonard, who had then just taken the Toronto Raptors to the championship, but Leonard chose their Staples Center cohabitants, the LA Clippers. So Pelinka reconstituted the roster, putting a premium on championship experience and cohesion and fortifying the group with veterans such as Danny Green, Avery Bradley, Quinn Cook and Jared Dudley. They re-signed Rajon Rondo, JaVale McGee, Caruso and Kentavious Caldwell-Pope, so there was some familiarity in the locker room. They also had a couple of surprise signings – Howard to a non-guaranteed contract after DeMarcus Cousins underwent knee surgery and Markieff Morris off the waiver wire in February — pay off in big ways as both players ended up starting playoff games for L.A.

Despite the dramatic overhaul and position atop the Western Conference for much of the season, the Lakers were snubbed when it came to individual accolades.

James, after changing positions to point guard in his 17th season and leading the league in assists for the first time in his career as a 35-year-old, came in second in MVP voting. Davis, who was third in the league in blocks, sixth among forwards in steals and anchored the Lakers defense that went from 14th in defensive efficiency to third, finished second in Defensive Player of the Year voting. Vogel, who coached the Lakers to the No. 1 record in the West in his first season with the team, finished fifth for Coach of the Year. And Pelinka, the man who put the whole thing together, finished seventh for the NBA Executive of the Year Award.

“That’s kind of been a thing this year with myself with Defensive Player of the Year, LeBron with MVP, now Rob with Executive of the Year,” Davis said Thursday. “But if we’re able to win one more game, then no one cares about those other awards. We’ll all be champions.”

Lakers governor Jeanie Buss, the daughter of late Lakers owner Dr. Jerry Buss, watched the game from a plexiglass-encased perch at AdventHealth Arena, on hand for the team’s first championship since her father died and she took over the family business.

Her team was the last team standing in the bubble and she’ll have to arrange for another championship banner for Staples Center when they return home.